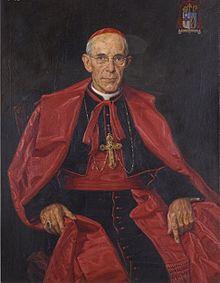 Today is the anniversary of Cardinal O'Hara's passing. Find out more about his amazing life.

John Francis O'Hara was born on May 1, 1888 in Ann Arbor, Michigan. His father had been a teacher, principal, newspaper editor and postmaster before studying law at the University of Michigan. The elder John O'Hara began his law practice in Peru, Indiana, and his son was educated in the parish school there.

In 1905, the family move to Montevideo, Uruguay, where Mr. O'Hara served in the consulate offices; two years later they moved to the consulate in Santos, Brazil. At the age of twenty,hereturned to Indiana, and entered the University of Notre Dame with a student teaching assistantship.

After graduation, Mr. O’Hara entered the seminary of the Holy Cross Fathers. He studied both at the University of Notre Dame and at Holy Cross College in Washington, DC. He completed his graduate studies at the Catholic University of America.

Father O’Hara returned to Notre Dame in 1917 as Dean of the Commerce Department and prefect of religion. In 1933,hewas named Vice President of Catholic University. The following year he was appointed president, a position he held until 1940.

On January 15, 1940, Father was consecrated a bishop and named head of the Military Ordinariate by Archbishop Spellman of New York. Throughout World War II, Bishop O'Hara supervised the Catholic chaplains in the armed services, and ministered to the spiritual needs of all Catholics serving in the military. In May of 1945, Bishop O'Hara was installed as the ordinary of the diocese of Buffalo, NY.

Bishop O'Hara was installed as the Archbishop of Philadelphia on January 9, 1952, succeeding Dennis Cardinal Dougherty. He became John Cardinal O'Hara on December 15, 1958.

Cardinal O'Hara's tenure as Archbishop of Philadelphia included a strong commitment to Catholic education. This commitment lead to ten new Archdiocesan High Schools, improved facilities for special education, and significant expansion in parish schools. He was also passionate about family life, social services, and the apostolate to the Spanish speaking.

Cardinal O'Hara died on August 28, 1960.  His funeral services took place in Philadelphia.  He was buried in Sacred Heart Church on the campus of the University of Notre Dame.